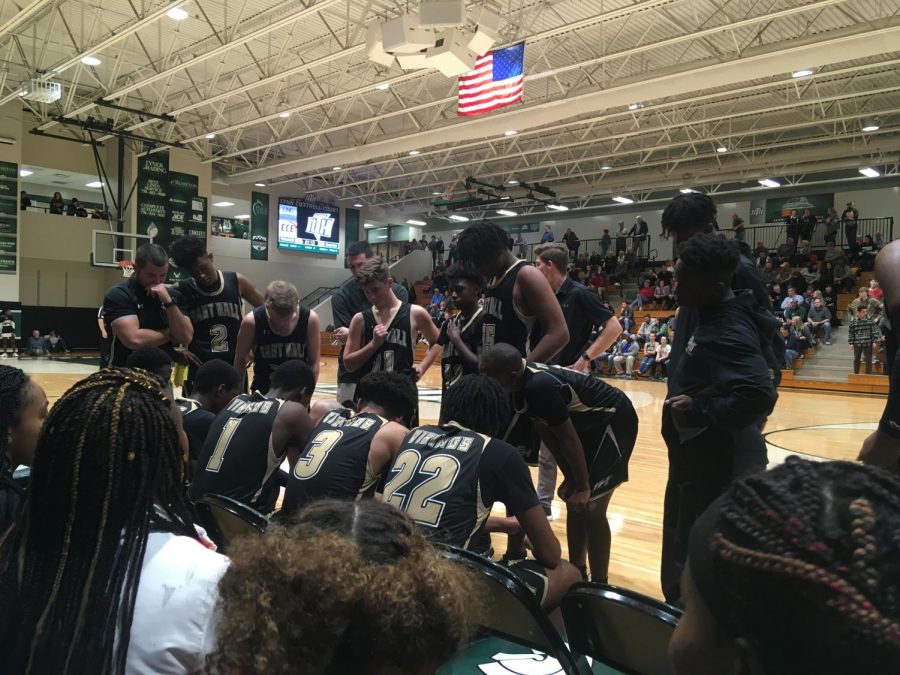 Timeout before going into overtime.

The suspense stirred within the halls about East Hall competing against one of our rivals teams. On December 4, the East Hall basketball varsity girls and boys team traveled to the North Hall . The stands filled quickly as the game begun. The gymnasium was crowded with both student sections pumped and supportive. The Varsity girls took the court ready to fight for a win. The girls played a overall well game. Though the loss, our girls gave their all and lost by 7 points leaving the score Trojans 52, East Hall 45. I spoke with a player named Aaliyah Ellison (11) about what were her thoughts on the game, She told me ,” Being under a lot of pressure had an impact on the way we played however we played a good game regardless of our careless mistakes”.

As the time flew away, it was time for our varsity boys to take the court. Our cheerleaders brought our boys on to the court . The boys pushed through a very competitive game against the Trojans. During this time, many parents and students were concerned about East Hall winning the game. The pressure and tension increased to a high amount . The students sections are anxious more than ever. The boys continue to lead by 2 points until the second half and this is when the game took a turning point. We received the jump ball by Jayvion Rucker (12) and took the lead. With 35 seconds on the clock, we tied and later went into overtime. Trojans 49, Vikings 49.

The audience and coaches were on pens and needles due to at this point there is no time to mess up. Lavoy Hill (11) made the winning free throws and the East Hall vikings won the game 57, Trojans 49.  After a long tense game, everyone became at ease and celebrated the win. After the game I spoke with starter five Jayvion Rucker (12) about his thoughts on the game, he told me,”The game was challenging but if it wasn’t for my team to block out the distractions and  work together, we would have not won the game”.