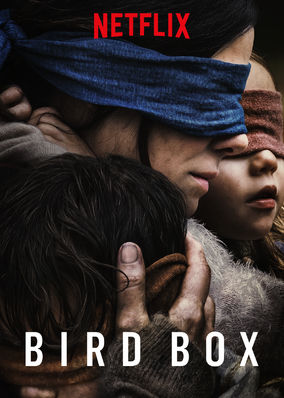 In the film Bird Box an invisible force ending the world by killing anyone thats sees it will commit suicide. The only way to survive is to listen and not to look at the creatures, but is that enough to keep them alive?
This particular world I’m talking about is the world of the movie Bird Box that came out December 13, 2018 with a rating of 62 percent of rotten tomatoes, with the actress Sandra Bullock playing the main character Malorie.

Malorie a mother of two struggles to survive blindfolded sailing cross the river, trying to get to safety.

But of course the movie have led people doing stupid things like the Bird Box challenge,
Where teens and kids bindfold themselves and run around crazy or drive recklessly.
Although I hope nobody at Valhalla family is doing this because it can only lead to pain or death and I’m pretty sure nobody wants that.

In my opinion, I think the movie was great and had a good story to it, but the movie had some unanswered questions. like what do the creatures look like or what went so wrong that cause the terrible incident. These question remain a mystery and we may never know

I asked some students their theories on the movie.

Other students say that God is punishing the people because they are unclean and impure and that they should see the light of day.