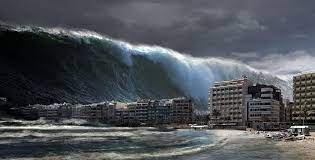 Let’s talk about tsunamis. There has not been any recent one yet, but I know how these start. There are some mega-tsunamis; there have been many bad things that have happened in a tsunami.These tsunamis start with an earthquake. They start with that then the water comes, and there have been videos where the water is rising. On the beaches the water goes back, then the ground starts to shake, and the water rushes onto land. But let’s rewind: now if there was a mega-tsunami, that is just the worst thing you ever can see. In Japan in 2011, there was a big earthquake called the Great Sendai earthquake. It caused a lot of damage. It was called the mega-tsunami and it caused a lot of people to drown.

So there has not been a major tsunami that has caused damage to a city since 2017. It is crazy when this happens; you have the mega-tsunami and then you just have a normal one. There were some movies on the tsunami and they show it as if you were in it The earthquake water comes with all of it’s force. There are a lot of ways it could happen, so the water just comes out and some of the water gets pushed back. The water rushes in all different ways. The first tsunami documented was back in 479 BC. These tsunamis have been around for a long time.

There is actually a way to be aware that a tsunami will come before hitting the coastline. There is a doctor who said you will know when it will come when you hear deep ocean wave sounds. Most of the time people will not know when the tsunami is coming until the water recedes, and that but it will also be a circle of water coming out. It is possible to stop a tsunami but it could only be 3% of the time depending where you’re at. If it was a small tsunami it is possible to survive by being on top of a building. If it is a mega-tsunami, then there is not anything to do besides get out of the danger zone.

There has not been a major tsunami recently, but you never know when it could come and strike again. I would not want to be in one of those tsunamis; just imagine how scared everyone is. I feel like a tsunami will come when there is a big earthquake, and something like a tsunami forming would be really bad. That is why you should be ready at any time. Some can cause a lot of damage, and others can just be like if they were floods. Tsunami have manycauses and deal many damages.